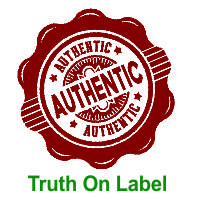 InnerOrigin requires all merchant partners to ensure that what’s in the package is on the label or on our website. Food fraud consistently makes headlines … here are just a few examples from recent years:

In April 2016 Choice magazine reported that over half of the supermarket oregano brands they tested were bulked out with 50% or more of olive and sumac leaves. One brand (‘Master of Spices) was found to have only 10% oregano content!

The Olive Oil industry is rife with corruption. Most recently, in February 2017, 33 Italian mafia members were arrested on a number of charges, including exporting ‘extra virgin olive oil’ which was actually olive pomace oil, a product that’s extracted from already-pressed fruit pulp using chemical solvents, gaining the mafia a profit margin more than 3 times that of cocaine.

This list of Chinese food fraud scandals, year by year, is enough to make your stomach turn and cause you to never buy a Chinese food product again … tofu fermented in sewer water, soy sauce made from human hair and worst of all, counterfeit baby formula that caused malnutrition resulting in the deaths of at least 53 babies in China in 2004 with an estimated 100-200 hospitalised, followed by another incident in 2008 where baby formula was contaminated with melamine, causing the death of 6 babies and sickness in an estimated 300,000 babies.

Spices are a key part of health, especially with the discovery of the amazing health benefits of spices such as tumeric and cinnamon. But, read this page about spice fraud in India before you grab the cheap option from the supermarket shelves. As an example, in 2016, a major Indian supplier was caught adulterating tons of turmeric with metanil yellow and red oxide of lead – the latter being highly carcinogenic.

By shopping on our InnerOrigin site, you can be assured of the quality, integrity and origin of the products you are consuming. InnerOrigin even goes so far as to list the country of origin of each individual ingredient!

Painmaster has affiliated with the InnerOrigin shopping platform to provide a trusted source of healthy groceries, personal and home care products to support our clients’ general health and wellbeing. ANYONE can shop though – you don’t need to be a client. We hope you love the products as much as we do.